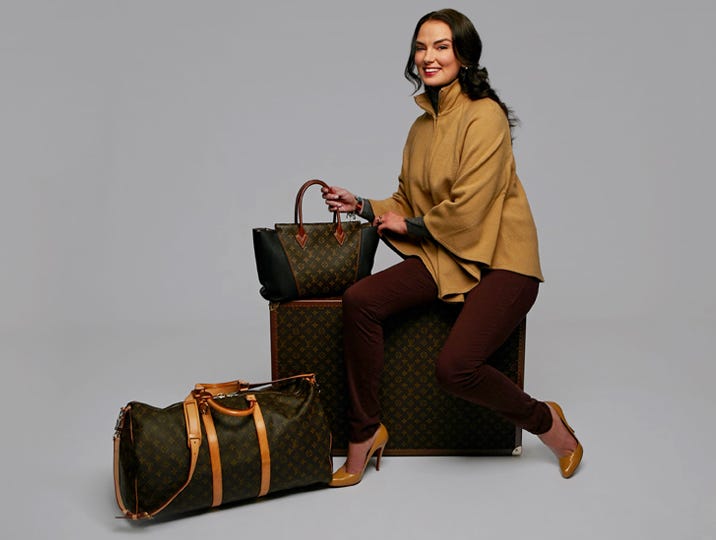 In 1892, Louis Vuitton died, and the company's management passed to his son, Georges Vuitton. Georges Vuitton had a vision for the company and wanted to grow it into a worldwide company. Then, in 1896... something huge: Georges Vuitton created the iconic Monogram Canvas.  By 1913, the Louis Vuitton Building opened on the Champs-Elysees, which was the largest travel-goods store in the world at the time. Soon after, stores were opened in New York, Bombay, Washington, London, Alexandria, and Buenos Aires. 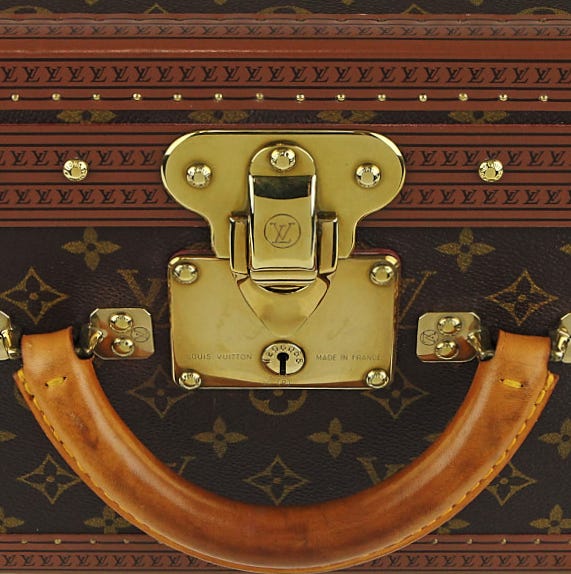 In 1936, Georges Vuitton died, and his son, Gaston-Louis Vuitton, assumed control of the company.  Gaston-Louis began to incorporate leather and transform the Monogram canvas into a more pliable material for use on handbags and small leather goods.

1987 saw the creation of LVMH, which was a merging of Louis Vuitton with Moët et Chandon and Hennessy, to create the largest Luxury Conglomerate in the world.

In 1997, Marc Jacobs became the company’s artistic director, introduced first RTW line and introduced the Vernis collection. Marc Jacobs brought a much needed youthful spirit to LV and spurred collaborations with famous artists: In 2001, Stephen Sprouse created the Graffiti and Roses lines; in 2003, Takashi Murakami created the Monogram Multicolore and Cherry Blossom lines; in 2008, artist Richard Prince created the Aquarelle, or more commonly known as the Watercolor Speedy. A reinterpretation of the iconic bag, this style features the classic Monogram pattern with a smudged painted fashion. There are 17 paint colors that are used in the smudging of this Speedy. These were released in white and brown. In 2012, Yayoi Kusama created “Infinitely Kusama” collection. Additionally, Marc Jacobs also introduced LV to collaborating with numerous street artists.

It was Georges Vuitton, Louis Vuitton’s son, who decided in 1896 to carry on the adventure begun by his father by designing the famous Monogram Canvas. At the time, to foil counterfeiters, he created a canvas bearing bold graphics, a pattern that was instantly recognizable. The unique pattern is composed of flowers, a universal and timeless symbol, and the entwined Louis Vuitton initials.  The pattern was based on the trend of using Japanese and Oriental designs in the late Victorian era. The Monogram fabric is crafted out of durable vinyl coated canvas.

Since it was first designed, the Monogram canvas has been associated with natural, vegetable-tanned vachetta cowhide leather.  Its smooth, natural grain brings out the harmony of the carefully selected hide. The transparency reveals the natural markings, such as veins and wrinkles, proving it has not been treated. This delicate, easily scratched leather is a testament to the bag’s history and develops a unique amber patina, unique to each bag and greater suppleness with time. The leather starts out with a white tone and gradually darkens over time, leaving a rich caramel or amber color. 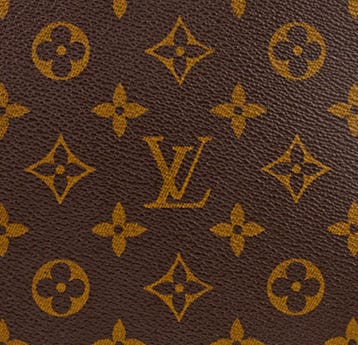 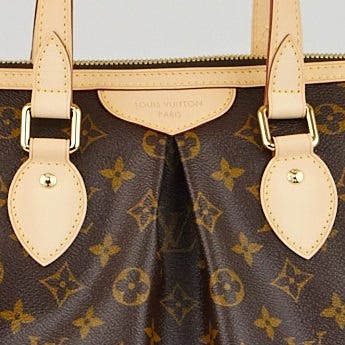 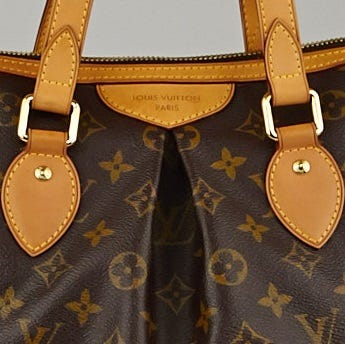 Contrary to popular belief, Damier Canvas was created before Monogram canvas. Influenced by the striped Raye canvas that was still being imitated, Vuitton wanted to take his design even further. In 1888, Louis Vuitton created the Damier Canvas pattern, which bore a logo that reads "marque L. Vuitton déposée", which translates into "L. Vuitton registered trademark".  1998 saw the one hundred year anniversary of the release of Monogram canvas, which lead to a re-release of the original Damier canvas.  Ready for a fun fact? “Damier” literally translates from French to English to “Checker Board.”  The current Damier Ebene pattern is printed on black coated canvas in small lines of two shades of brown to create the unique and lovable checked pattern, which is why Damier Ebene fades to black in some areas when it’s been gently used. 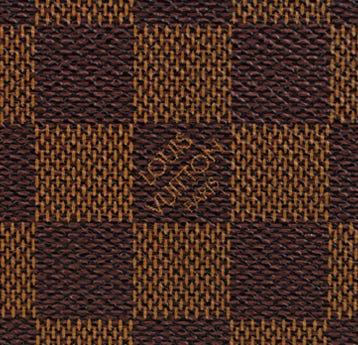 Launched in 2006, this line is a new interpretation of the iconic Damier Canvas, the Damier Azur collection takes us away to the celebrated shores of the French Riviera. At once classic and casual, subtly different, Damier Azur offers a complete collection of products ranging from city bags to luggage. 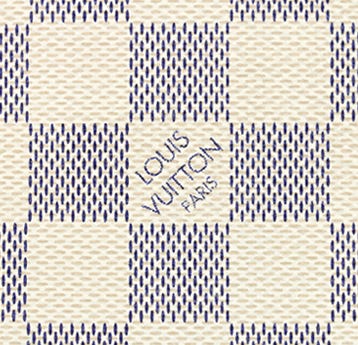 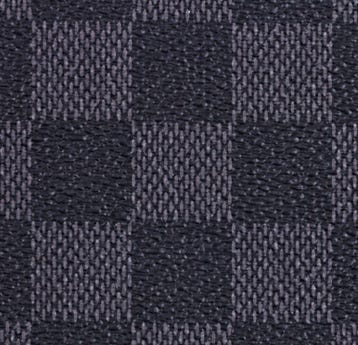 In 2003, in collaboration with Japanese artist Takashi Murakami, the Monogram Multicolore line was born.  Takashi Murakami is considered one of the leaders in Japanese neo-pop art. Famous for his colorful, cheerful work, Murakami created the fun and cheerful Monogram canvas which uses 33 colors to create the well known Monogram pattern. 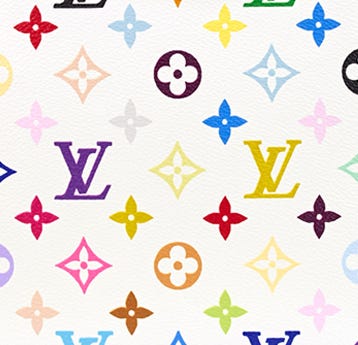 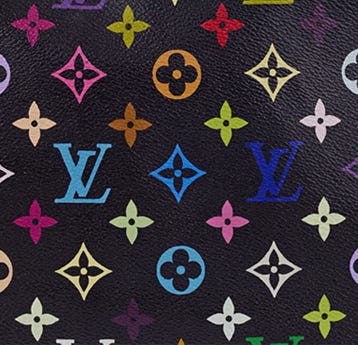 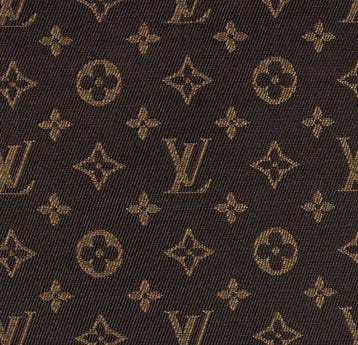 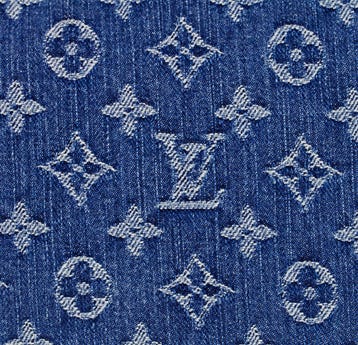 The Vernis line was introduced in 1997 by then, newly appointed Artistic Director Marc Jacobs. The Vernis line was inspired by RTW collections and is continually released in a range of unique, sparkling colors that highlight the famous Monogram print.. In French "vernis" means ‘varnish’ which explains the shiny and sparkly effect of the bags. Vernis is a coated leather, similar to patent leather, that is embossed with the famous LV Monogram. 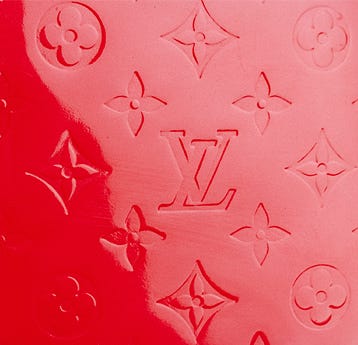 Inspired by a grained leather used by Louis Vuitton in the 1920’s, the Epi line, created in 1985, is the first leather line of the House. The Louis Vuitton Epi Leather collection was created to respond to the demand for more durable leather necessary in modern travel conditions. Its originality comes from the graphic two-tone effect which makes it immediately recognizable.

The process consists of printing an intensely dyed leather before applying a special coloration on the surface of the grain, which can withstand any weather condition. The natural stretch of Epi leather also offers good qualities of resistance. Curated in a multitude of colors, we appreciate the durability and timelessness of the Epi leather collection.  Older Epi typically comes with goldtone hardware, with a brief interlude of brushed brass and titanium. Louis Vuitton introduced shiny silvertone hardware in 2004.  In Spring 2001, the Epi Plage collection was a limited release with a vinyl transparent Epi line, used for the beach. This came in three colors - Grenadine Red, Coconut, and Orange. In 2010, Electric Epi was introduced as a glossy patent leather version of Epi in three colors, Plum, Black, and Amande. In 2011, the Epi collection was released with a new assortment of bright Rainbow colors. 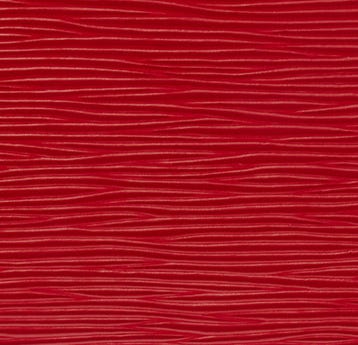 Released in 2012, the Monogram Empreinte line is both luxurious and durable. After carefully selecting the highest quality of calf leather, it is dyed throughout and then enriched with tannins for a rounder aspect. Then, the leather is drummed several times to softly pull up the natural grain of the skin and reveal its supple, luxurious feel.  Finally, the leather is embossed with the iconic Monogram pattern. 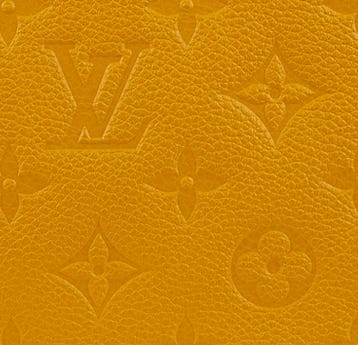 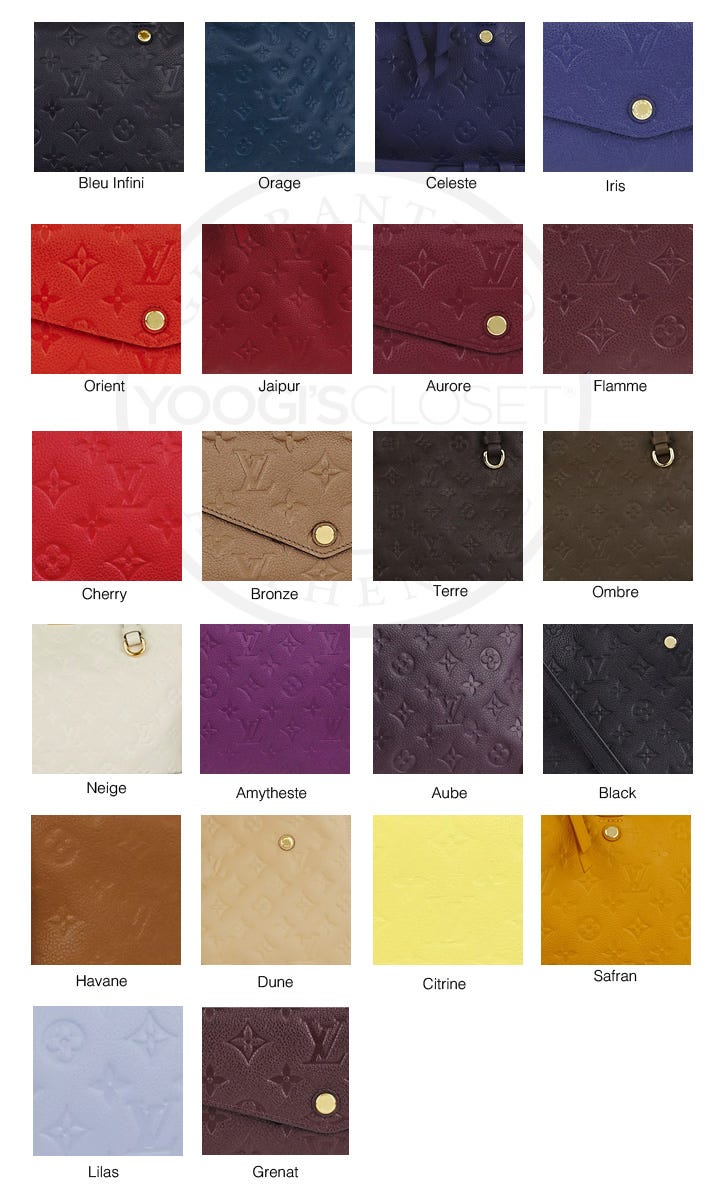 The taiga leather line is named after the largest coniferous forest in Russia called the Taiga. This line was introduced in 1993 and has remained popular since. Mostly used to construct briefcases and travel accessories, the Taiga line is sophisticated and will always remain a classic. The Taiga line is only released in Men’s accessories and leather goods 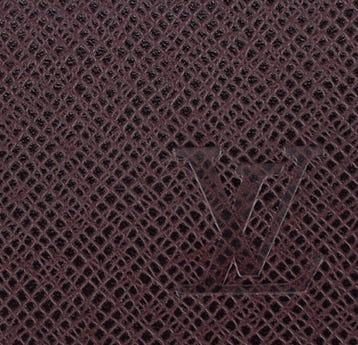 Suhali Leather is made from Suhali goat leather that have been hand-selected from the highest quality goatskins. Launched in 2004, it is natural grain which has not undergone chemical treatment to maintain the excellent balance between suppleness and durability. 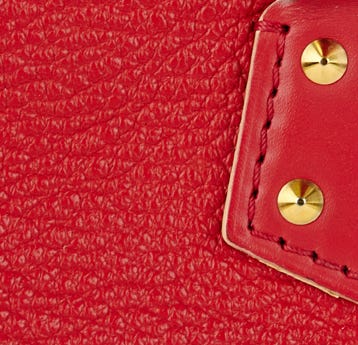 Taurillon leather is super soft calf leather with visible grains. You'll feel subtle bumps when running your fingers across the leather. Due to its natural grain, it's more scratch-resistant than lambskin leather and it will soften over time. 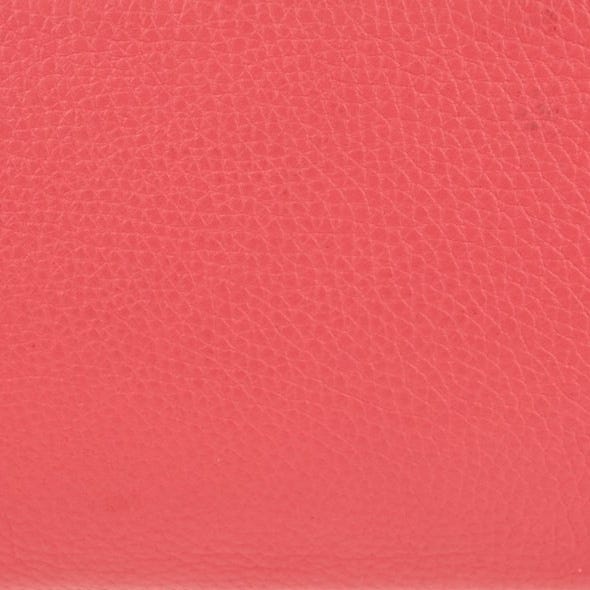 Introduced in 2007, the Mahina line is made from gorgeous drummed leather and has meticulous perforations in the classic Monogram pattern. The Mahina collection was inspired by the phases and crescents of the moon and in Polynesian culture the Mahina is a lunar deity. 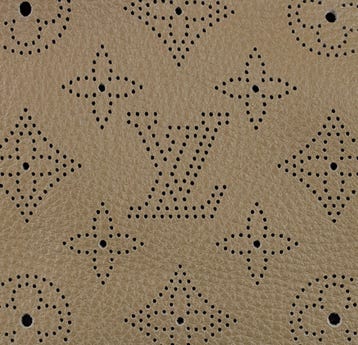 Did you know Louis Vuitton often names bags and items after places and people? Here are some examples:
Alma: Named for the Alma Bridge, a span that connects two Parisian neighborhoods
Trevi: Named after Trevi Fountain in Rome, Italy
Tivoli: An Ancient town near Rome, Italy
Palermo: Named after city in Italy called Palermo
Popincourt: A road in London made famous by the movie "My Fair Lady.” Also, a market.  Also originally created to carry knitting yarn.
Bosphore: Named after a body of water near Turkey
Abbesses: A station of the Paris Metro system
Deauville: A luxurious city in France located near Normandy
Amazone: Named after the Amazonian rain forest
Danube: Named after the Danube river, the second longest in all of Europe
Nice: Named after the City of Nice, France.
Beverly: After Beverly Hills, California
Manhattan: Manhattan, New York City
Hudson: A river that runs through New York State
Griet: The subject of a painting of the artist Vermeer
Rita: Named after actress Rita Hayworth
Marilyn: A tribute to Marilyn Monroe
Amelia: Named after Amelia Earhart
Ursula: Named after Ursula Anders
Mary Kate: Named after actress Mary Kate Olsen
Eliza: Eliza Doolittle a character in "My Fair Lady" played by Audrey Hepburn
Priscilla: Named after Joan Crawford's character in "Across to Singapore"
Courtney: Named after singer Courtney Love
Saleya: Is named after flower/produce market in Nice, France
Saumur: Is a city in Loire Valley of France
Theda: Named after silent film actress Theda Bara
Hampstead, Highbury, Knightsbridge & Chelsea: Named for London suburbs
Pont Neuf: Named for a bridge in Paris
Montsouris: Named after a famous park in France
Eva: Named after model Eva Herzigovia
Galliera: Fashion museum in Paris
Tulum: Named after the Mayan City in Mexico
Sofia Coppola: Created by and named after American film director, actress, producer, Academy Award-winning screenwriter Sofia Coppola.
Batignolles: Named after the town in France
Laguito Briefcase: Named after a cigar